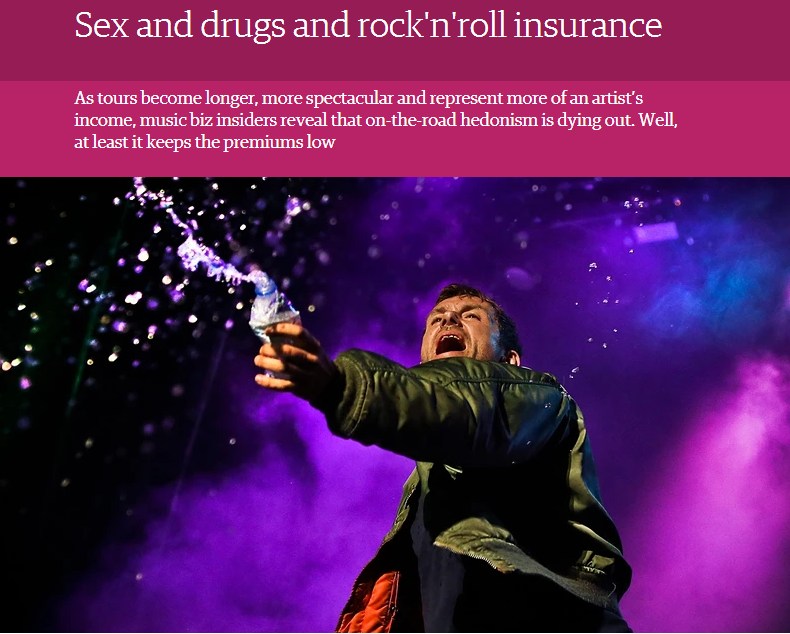 A Recent news items in the Guardian (Sex and drugs and rock'n'roll insurance) suggest that cancellation premiums are on the rise with more non-appearance cancellations and the likelihood of high profile acts with heavy touring schedules cancelling their gigs.

Non-Appearance cover is routinely taken out where the specific headlining act is necessary to the event taking place. Acts Like Blur, Robbie Williams, Coldplay, The Rolling Stones all avail of Non-appearance cover and the better the reputation of the act for turning up, the better rate they will get. There have been some high profile claims in recent years. For instance Morrissey has pulled out of numerous events including refusing to go if a festival is not Meat-free. Some acts like Robbie Williams has to undergo medicals before each tour to get cover, as his insurers perceive him as a risky case.

Conversely age and experience can mean lower premiums, people like Van Morrisson, Tom Jones and Cliff Richard keep touring and it doesn’t necessarily follow that when you get older you are less reliable for turning up for your gigs. Read the full article here: Sex and drugs and rock'n'roll insurance

What Our Policyholders Are Saying

"We use Event Insure for our Festival insurance needs; we would highly recommend the team at Event Insure"

"I have found dealing with Eventinsure very refreshing"

"Eventinsure have an experienced team and competitive rates"